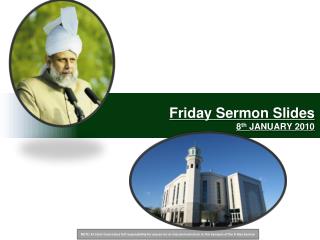 Friday Sermon Slides 8 th JANUARY 2010. Summary. January 8th , 2010. Financial sacrifice is a source of progress in one’s faith and can only result due to the love and loyalty to God. How to Prepare A Sermon - Preparing a sermon can be very easy. if you find it difficult, you probably don't know the

Friday Sermon November 26 TH , 2010 - Virtue of steadfastness and practice of the promised messiah (on whom be peace).

NASIRAT UK NEWSLETTER NOVEMBER/DECEMBER 2010 - . spending in the way of god: summary of friday sermon delivered by