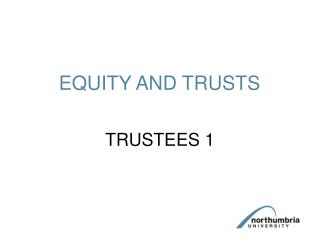 EQUITY AND TRUSTS. TRUSTEES 1. Trustees and their role in administration of the trust. First we will consider some general principles and then: Appointment and retirement of trustees Powers Breach Remedies. General Principles. Is trusteeship a privilege?

UBS UK Equity Income Fund - . february 2007. this document is for institutional investors and intermediaries only. it is

History and Nature of Equity - . professor cameron stewart. the blind men and the elephant. john godfrey saxe. the

Reporting and Interpreting Owners’ Equity - . chapter 11. learning objectives. explain the role of stock in the capital