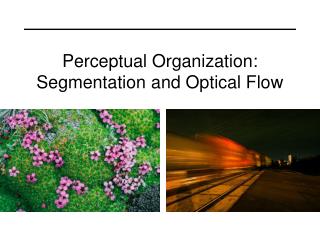 Perceptual Organization: Segmentation and Optical Flow. Inspiration from psychology. The Gestalt school: Grouping is key to visual perception “The whole is greater than the sum of its parts”. occlusion. subjective contours. familiar configuration. PDE methods for Image Segmentation and Shape Analysis: - From the brain to the prostate and back presented by john

Market Segmentation - . market segmentation is the subdividing of a market into distinct subsets of customers. segments