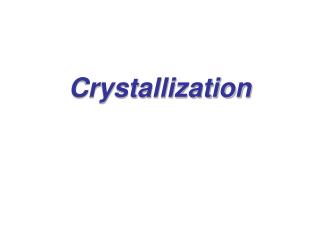 Crystallization - . a.k.a applied voodoo…. blog entry that says it all…. i have a difficult compound that i'm trying

Crystallization Laboratory - . putting crystals in perspective. why do i need them? how do i grow them? m230d, january

Crystallization of macromolecules - This presentation will probably involve audience discussion, which will create