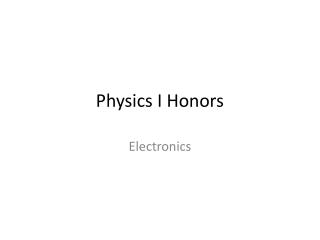 Honors Physics - . mrs. melissa hughes. sit back and relax. let parent viewer do it for you! all presentation material

Physics Honors - . good news/bad news: these are the same formulas we used for linear motion. do you know them?. if the

Honors Conceptual Physics - . final exam review—2 nd semester. what is the test going to be like?. 92 multiple choice

Physics 1 honors - . chapter 8 – energy sections 8.8 and 8.9. efficiency. we have assumed so far that all machines are

Welcome to Honors Physics - . mr. rickard, room 113 if your schedule says something else, you’re in the wrong place.