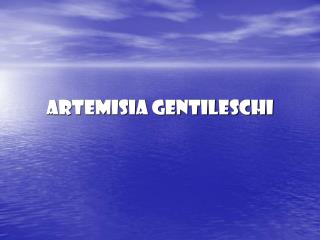 Artemisia gentileschi. history. Born in 1593 to well-known Roman artist, Orazio Gentileschi. Followed Caravaggio’s use of putting dramatic events on a plain dark background. Was a well-known artist in Florence by 1615. Moved to Rome in 1620.

Art Criticism on Artemisia Gentileschi’s: Judith and Maidservant with the head of Holofernes - . christian hunnel.

Population structure of Artemisia genipi in a glacier foreland of the Central Alps - . erich schwienbacher &amp;

The use of Artemisia annua in the prevention of necrotic enteritis in a broiler disease model - . r.m. engberg, k.