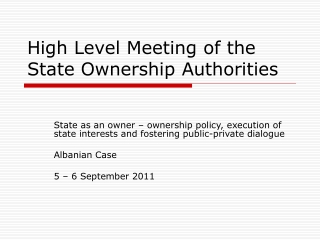 Hungarian State Holding Company:Governance of state ownership - . presentation to the high level meeting of the state

State of the Church Meeting - What has been happening in the church?. finances well done!attendance we're growing!. what

The EGTC: State of play &amp; current challenges 3 rd Meeting of the EGTC Approval Authorities - The egtc: state of