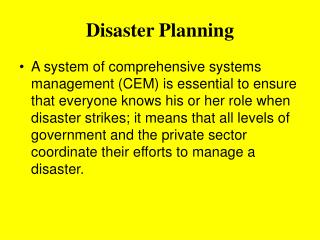 Disaster Planning. A system of comprehensive systems management (CEM) is essential to ensure that everyone knows his or her role when disaster strikes; it means that all levels of government and the private sector coordinate their efforts to manage a disaster. Disaster Planning.

Disaster Recovery Planning - . it:network:applications 10-150-188. boy scout motto: be prepared. what is the worst that

Disaster Recovery Planning - . recorded webinar. overview. what is disaster planning? why do we need disaster plans? how

LOCAL CHURCH DISASTER PLANNING - . presented by the. “while we may not be able to solve the many crises facing us, we