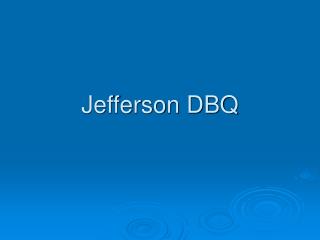 DBQ - . document based question. what is it?. an essay question that requires you to interpret primary source documents.

DBQ - . analyze the validity of the following statement: world war 2 played a key role in revitalizing the american

DBQ - . essay guidelines. frequently asked questions. can i go to the bathroom? no. how long should my essay be?

DBQ - . the dbq is 25% of the total exam score there will be a prompt you will be given a set of documents, no more than

DBQ - . what does it mean, and why are we using it!??!?. dbq document based question prompt is provided question has

DBQ - . sample thesis . doc 7 seneca is an upper-class roman whose attitude reflects the roman belief that although

DBQ Writing - . document based question. what is the dbq?. this question is based on a bunch of documents (usually around

The DBQ - . about the dbq. primary purpose of dbq is not to test students’ prior knowledge of subject matter. rather,

The DBQ - . thesis statement. question: although new england and the chesapeake region were both settled largely by

DBQ Practice - . based on this map, state one way the united states government dealt with the issue of slavery in the

JEFFERSON - . takes office. in the presidential election of 1800 there were two political parties going head to head -

DBQ Practice - . reform . “reform movements in the us sought to expand democratic ideals.” assess the validity of

DBQ Writing - . how to: document based question. what is the dbq?. this question is based on a bunch of documents

APUSH DBQ - . note: the intro is the most important paragraph in the dbq – make a great impression on the reader. dbq