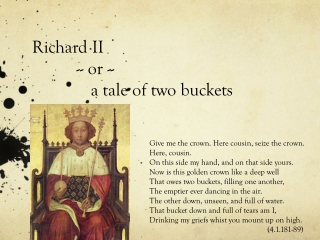 Richard II -- or -- a tale of two buckets. Give me the crown. Here cousin, seize the crown. Here, cousin. On this side my hand, and on that side yours. Now is this golden crown like a deep well That owes two buckets, filling one another, The emptier ever dancing in the air.

A Tale of Two Cities - . chapter summaries. book 2, chapters 1 and

A Tale of Two Cities - . 10 th grade honors. things you did well. excellent overall understanding of the text better job

A Tale of Two Trees - . new hire orientation. introductions. your name your hometown your favorite olive oil flavor your

A Tale of Two Countries - . by: clare girnus . learning target. i can explain how culture defines my chosen group in the

A tale of two students…….. - I set off to uni very confidently last term – a new way of life, independent of my

A Tale of Two Cities - . introduction to the novel. background into the novel. dickens believed that public history was

A Tale of Two Empires - . the rich/poor gap. rome’s beginning. the rich poor gap first began its growth at the start of