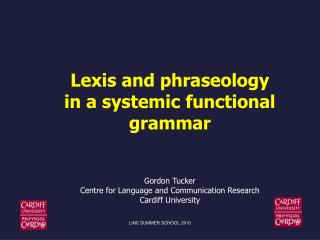 Lexis and Grammar for Translation

Lexis and Grammar for Translation - . ? it is of crucial importance to realize that some words are in more than one word

Lexis and Grammar for Translation - From words to word classes. the stock of english words is immenseaccording to david

Communicative Competence and Systemic Functional Model of Language - . hagustien@yahoo.com. why we need a cc

Language and Grammar - . grammar – rules used to organise and describe language syntax - the way sentences are

Centre for Research in English Language Learning and Assessment - . language testing in the past: three lessons to be

Centre for Research in English Language Learning and Assessment - . tests, testers and testing: the british council and

Centre for Research in English Language Learning and Assessment - . three lessons from the historiography of language