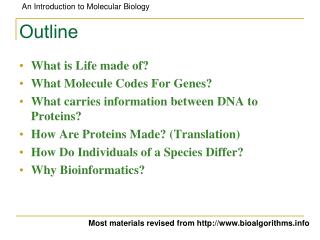 Outline What is Life made of? What Molecule Codes For Genes? What carries information between DNA to Proteins? How Are Proteins Made? (Translation) How Do Individuals of a Species Differ? Why Bioinformatics? Most materials revised from http://www.bioalgorithms.info What is Life made of?

Outline - Does the law of one price hold in retail banking? an analysis of interest rates national differences in the