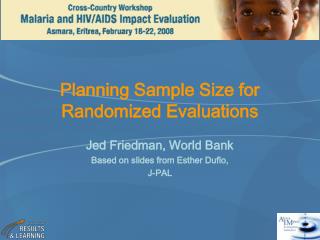 Ethics of randomized evaluations - . overview. ethical principles the division between research and practice respect for

Statistical planning and Sample size determination - . planning. which variables will i collect and how will they be

Using Randomized Evaluations to Improve Policy - . rachel glennerster. objective. to separate the impact of the