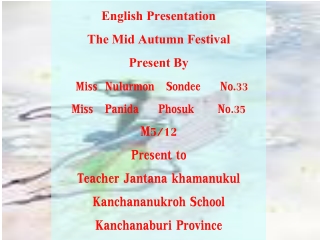 Mid Autumn Festival - What can we do at mid autumn

Chinese 中国 Festivals 节日 - . overview. there are 8 main festivals celebrated throughout the year that are: spring

Autumn - . autumn. the months that make up autumn are september, october and november. in england there are many special

Autumn celebrations - . autumn talking tub and visit to our woods. what do you know about autumn? why are the leaves

Festivals - . and celebrations. brainstorming. what kinds of traditional chinese festivals do you know?. spring festival.

Price differentials of moon cakes before and after Mid-Autumn Festival in Hong Kong - . 4u sammi kwok (14) melissa