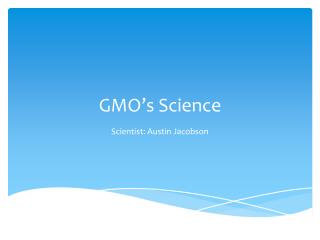 GMO’s Science. Scientist: Austin Jacobson. WARNING: QUIZ AT THE END!!!!. All pictures are from Google images. The Main Components. The gene you want to transfer(trans-gene). The organism you want to put it into (target species). A vector to carry the gene into the target species. A PHILOSOPHY OF COMPUTER SCIENCE - . philosophy of computer science. is concerned with those philosophical issues that

Renaissance Science - . what helped the development of science in the renaissance (14 th – 16 th centuries)?.