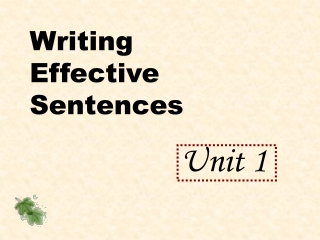 Writing Effective Sentences. Unit 1. Lesson 1 Simple sentences with action verbs. OBJECTIVES: After completing this lesson, you should be able to define a simple sentence identify the subject, main verb, and auxiliary verb(s) in a simple sentence recognize direct and indirect objects Linear Writing - . 1. all of the sentences refer directly back to the main idea . 2. the order of the supporting detail

Writing and Publishing a Scientific articles - A few words about writing style. short declarative sentences-easiest to

Writing Easy-to-Read Documents - . c h a p t e r 7 . presentation overview. how do you write clear sentences? how do you

Sentences - . sentences. objective  by the end of this section you will be able to: identify the different parts of a

Combining Sentences - . why combine?. too many simple sentences can become boring. combining sentences varies the

Writing Strong Topic sentences - . why do we need strong topic sentences?. get attention. get interest. make a good first

Power Writing - . umbrella writing. preparation for power writing. explain we will be learning a new way to organize