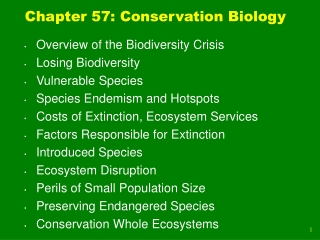 Biology and You-Chapter 1 - . i. themes of biology. a. living organisms have certain characteristics in common. 1.

Chapter 55: Conservation Biology &amp; Restoration Ecology - . what is conservation biology? the integration of all

Conservation Biology - . a relatively new discipline that has brought together experts concerned about the loss of

Getting What You Paid For - Paul j. ferraro department of economics andrew young school of policy studies georgia state