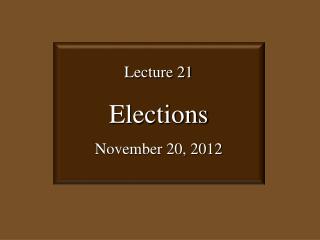 Lecture 21 Elections November 20, 2012. I. Why Bother Voting?. I. Voting & Apathy. WHY DO PEOPLE BOTHER TO VOTE? The problem: In a large election, one vote never makes a difference. 21 November 2012 - . we have undertake the following activities to conduct the paper audit: administrative assistants and

Tunis, November 20, 2012 - The economic and social fund for development (esfd): ten years of partnership with local