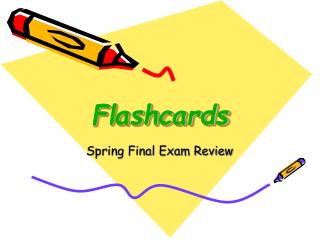 Flashcards. Spring Final Exam Review. What agency was established to set and enforce pollution standards?. Environmental Protection Agency. What were the Helsinki Accords?. Respiratory Exam 1 - . flashcards. felton. microbiology. what is the most common infectious disease of humans?. the

Unit 2 - Sign up for your packet at the supply center!. unit 2. building a nation. objectives . swbat sign up for their

Ecology Quiz Review - . empty slide to keep flashcards in order. what is the study of living things and how they interact

Learning Review - . flashcards for terms on the test. definition. the type of learning that occurs when a person observes

Verbs Animate Intransitive (VAI 123 ) - . to use these flashcards, follow these steps: on the main “ verb card ,”

Single Digit Whole Number Addition FlashCards - . the whole numbers are the natural numbers (1, 2, 3, …), and the

Key Signature Flashcards - . these are all key signatures in treble, bass and alto clef. instead of the usual handheld

Chapter 26 World War II Review Flashcards - . who was the fascist leader of italy prior to and during world war ii?.