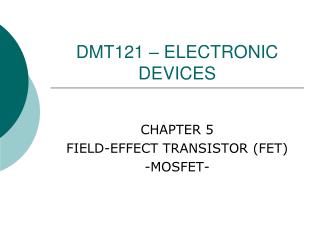 ABC Book of Electronic Devices and other related things! - . by: carlos rodriguez. a is for android!. this is an

Hand Held Electronic Devices in the Classroom - . tom bechtel 6/20/2011. research question. does the use of hand held

DMT 121 ELECTRONIC DEVICES - . chapter 2 diode applications. at the end of this class, students should be able to:-.