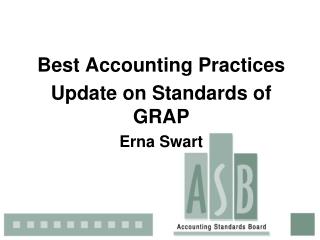 Best Accounting Practices Update on Standards of GRAP Erna Swart. Disclaimer. The views and opinions expressed in this presentation are those of the individual. Official positions of the ASB on accounting matters are determined only after extensive due process and deliberation. Overview. Regulations, Best Practices and Standards - . an overview and case study for putting it to work in your organization.

Update on Standards of GRAP July 2019 - . disclaimer. the views and opinions expressed in this presentation are those of

The Convergence of International Accounting Standards and Practices - . how different is accounting internationally

Implementation of the Standards of GRAP for 2012/13 - . presented by jeanine poggiolini.

Management &amp; Accounting Practices Office Update - . lily wang, mapo financial services. who we are. what we do.