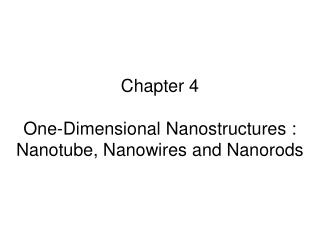 Chapter 4 One-Dimensional Nanostructures : Nanotube, Nanowires and Nanorods. Synthesis Methods. Bottom up:. Spontaneous Growth. A growth driven by reduction of Gibbs free energy or chemical potential. This can be from either recrystallization or a decrease in supersaturation. 1-D Kinematics - . kinematics kinematics is the branch of mechanics that describes the motion of objects without

Geometry - . 3 dimension. objectives. classify three-dimensional figures according to their properties. use nets and

Chapter 4: The Mole and Stoichiometry - . chemistry: the molecular nature of matter, 6e jespersen/brady/hyslop.