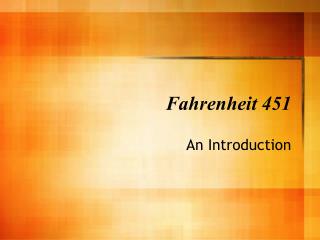 Fahrenheit 451. An Introduction. Historical Context. World War II had ended only a few years before Era of McCarthyism Threat of nuclear warfare loomed Many Sci-Fi books and movies reflected this fear. Predict or Prevent?. Bradbury claimed he was trying to “prevent the future”. Fahrenheit 451 Warm-Up #1 - . ray bradbury opens the novel with a quote by juan ramon jimenez: “if they give you ruled

Customary Measurement - . customary measurement . the united states uses customary units. many other countries use the

Fahrenheit 451 - . by ray bradbury. 451 degrees fahrenheit. the temperature at which paper catches fire . . . what is

“Everyday Use” by Alice Walker - . good morning! . please take a copy of the fahrenheit 451 test from the front

The ABC s of Fahrenheit 451 - . by: ivica bajic . is for asylum: a place many thought montag should be. . is for beatty:

Chapter 11 - . energy in thermal processes. tgif. 2. the temperature at which the fahrenheit scale reading is twice that

Fahrenheit 451 - . themes. identity living divided lives (or split personalities) trying to be what we’re not to please

Arctic/Tundra - . jagger and keira. the name of our habitat is the arctic and alpine tundra regions of the north pole.

Fahrenheit 451 - . book burning from wikipedia, the free encyclopedia so….why did ray bradbury write a book about the