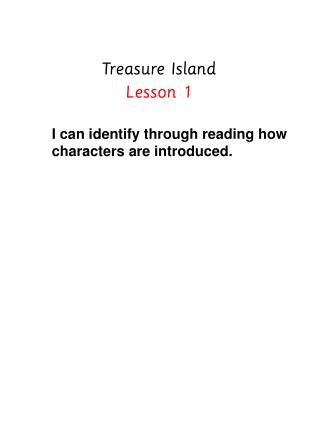 Treasure Island Lesson 1. I can identify through reading how characters are introduced. TREASURE ISLAND Chapter 1 – The Captain’s Secret This is the story of my incredible adventure on Treasure Island. I’m Jim Hawkins and I help my mother run the Admiral Benbow Inn…. Treasure Island - . we set sail. anchor- a heavy object attached to a rope or chain that falls to the seafloor to hold a

TREASURE ISLAND - . by robert louis stevenson . fifteen men on the dead man’s chest— yo-ho-ho, and a bottle of rum!

Treasure Island - . captain smuggle is a bloodthirsty treasure-seeking pirate. there is no treasure that lies forgotten

FIVE ON TREASURE ISLAND - . home reading. chapter 1. the strange cousin. pre-reading task. why is the title of this

Treasure Island Estimation Center - . directions. use the guided worksheet to make your way through treasure island (it

Treasure Island Hotel &amp; Casino - . experience the most exciting, distinctive and friendly service with luxury and

Treasure Island Cottages for Rent - Treasure island is one of the most popular family holiday destinations in florida.