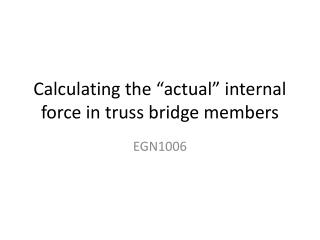 Calculating the “actual” internal force in truss bridge members. EGN1006. Learning Goals: The student WILL be able to:. Calculate the components of a force vector . Add two force vectors together . Draw a free body diagram. TRAIL BRIDGE INSPECTION 101 - . mission statement. this powerpoint is intended to familiarize the budding inspector with

The Waddell A-Truss Bridge - . designing and building file-folder bridges as an introduction to engineering. col stephen

Trusses 2 - •fabricated from various steel sections available, jointed together by welding or by bolting usually via

Chapter 12 - . forces and motion. force. force is a push or a pull. force. a force can cause: a resting object to move

Intermolecular Force - . enzymes. before knowing more about enzymes, we should have some basic concepts on intermolecular