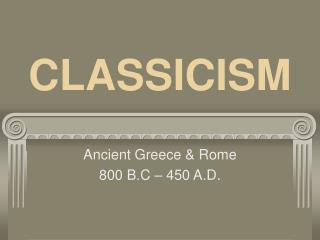 CLASSICISM. Ancient Greece & Rome 800 B.C – 450 A.D. Philosophy of Art. The arts present the universal idea of beauty through logic, order, reason and moderation. The purpose of the arts is to show perfection in human form and structure. Characteristics of the Arts. Neo-Classicism - . m s l e roy grade 11. neoclassicism: a reaction to the baroque. for every action, there is an

Renaissance and classicism - . the reinassance style begins in england in the middle of 16 th century. it consisted in a

CLASSICISM ARCHITECTURE Week 15 - . classicism in architecture developed during the italian renaissance, notably in the

Introduction to Neo-Classicism - . why the name?. reverence for classical authors imitation of classical forms use of

Introduction to Neo-Classicism - . why the name?. reverence for classical authors imitation of classical forms use of

Neo-classicism 1720-1827 - . inspired by a revived interest in the styles of classical antiquity in painting, sculpture,