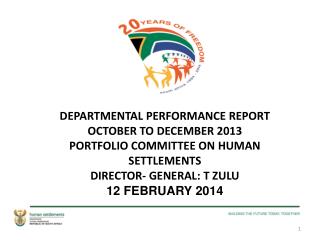 Anchorage School District Profile of Performance and School Report Card to the Public - . assessment and evaluation

18 FEBRUARY 2014 Parliament, Cape Town. - Second quarterly report on the performance of the department in meeting its

Presentation to the Portfolio Committee on Health 16 October 2013 - . purpose of the presentation. to reflect on key