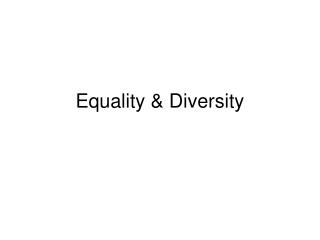 ORDER VS. EQUALITY VS FREEDOM - Which one is more important to you, and why? why should this question even matter to me?

EQUALITY AND DIVERSITY TRAINING - Improving working lives. equality and diversity training. why are we here?. raise

Unity in Diversity - . srila prabhupada wanted the leaders to discuss how to apply unity in diversity. srila

Workshop on Faculty Recruitment for Diversity and Excellence - . advance program at the university of michigan strategies

The Strength And Power Of DIVERSITY - . contents. objectives self assessment what is diversity? important definitions