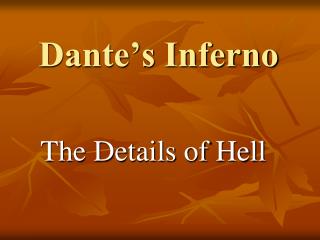 Dante’s Inferno Then and now - . by jay corcoran-shaffer, eleanor allen-henderson, and leslie kenney and lena blackmon!

The Inferno - Canto viii: the city of dis. the inferno. by: ashley martin, nikki halstead, and dan slaney. virgil and

Dante Alighieri - . his life and his work: the divine comedy. inferno. dante alighieri’s life:. born in florence in

Goals: - . understand social and historical values as reflected and embodied in a literary work. make connections between

Amy Galofaro Dante’s Inferno Canto 7 - . in canto seven, virgil and dante are in the fourth circle of hell and even