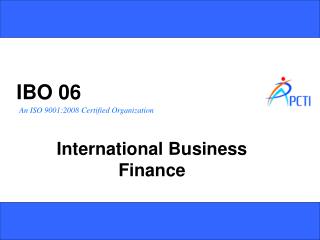 IBO 06. International Business Finance. BLOCK 1. International Financial System. It involves the management of three processes (I) the adjustment of balance of payments positions, including the establishment and alteration of exchange rates; Igbo/Ibo Religion - . by:. ibu forest spirit mask. religion. it is estimated that 50 percent of nigerians are muslim, 40

The “Ibo of Cameroon” - . question 1 . angola was the colony of which country? . answer 1. portugal granted