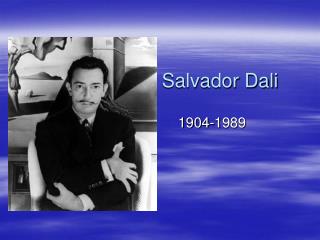 Salvador Dali. 1904-1989. About the Artist. Salvador Felipe Jacinto Dali I Domenech was born in 1904, in Spain. He was the son of a strict lawyer and a mother who encouraged his artistic nature. Salvador suffered from some difficult times when he was young.

Salvador Dali - . (1904-1989) barcelona spain he is considered a painter, sculptor, graphic artist and designer he prides

Salvador Dali - Loved attention, and here are some unusual things that he did to get it. dali said that he received

Salvador Dali - . el salvador was given - by the spanish painter, the schedule, the sculptor, the director, the writer.