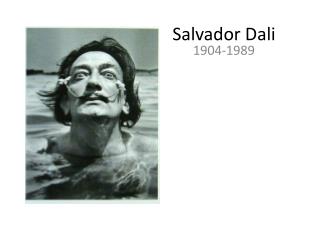 Salvador Dali. 1904-1989. As a young man, Dali began to study art at the Royal Academy of Art in Madrid. He was expelled twice and never took the final examinations. His opinion was that he was more qualified than those who should have examined him. S. Dali – The three sphinxes. Salvador Dali - . el salvador was given - by the spanish painter, the schedule, the sculptor, the director, the writer.

Salvador Dali - . (1904-1989) barcelona spain he is considered a painter, sculptor, graphic artist and designer he prides

Salvador Dali - . wait for music to start. enjoy the pictures with the music. slides will advance automatically every

Salvador Dalí (1904-1989) - . salvador dalí once stated that his purpose was to “systematize confusion and thus help