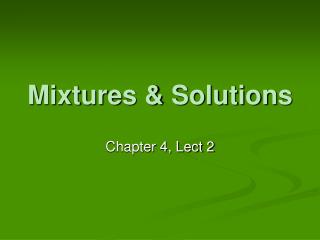 Chp 13. SOLUTIONS - . 13.1 solutions. what are solutions?. solutions. solutions are homogeneous mixtures of two or more

Chapter 12 - . solutions. types of mixtures. 1. solutions aka homogeneous mixtures/can only be separated by evaporation

Solutions and mixtures - . solubility experiment. can anything change solutions?. solubility is the ability of the

Substances, Mixtures, and Solubility - . chapter 8 physical science. 8.1 – what is a solution?. objectives: distinguish

Mixtures and Solutions Lab Activity - . your group will be designing a lab to determine the solubility of different

The Nature of Solutions - . looks pure…but it ain’t!. solutions are not pure – they are mixtures that look the same