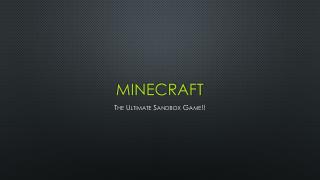 Minecraft - . by ethan xydis. gamemodes. in m inecraft before you start you must know about gamemodes gamemode 1. you can

MINECRAFT - . by sean murray. my first discovery of the rare pink sheep. a creeper. ryan and me having fun in our base. a

MINECRAFT - . by cole / pedro. who made m inecraft. minecraft was made by m arkus persson and jens b ergensten. why did

Minecraft - . gian alexander russo. c reepers. creepers explode when they get near you. right before they explode they

MINECRAFT - . minecraft is a game that you build a house, create stuff and battle monsters. what is minecraft ? . what

Minecraft - By nikhil. minecraft. introdution. i think minecraft is a great game for making houses and measuring. mine

Minecraft - . all you need to know by andrew pridgen.

MINECRAFT - . www.build-it-yourself.com. the amaterasu’s land has potential. the problem: minecraft

MineCraft - Minecraft offers you the best highlights that i have recorded above, however there is considerably more you

Minecraft - . by a ngela turner. introduction. have you ever been in a world of your creation, with your friends? well

MineCraft - Mcfansite is a minecraft based website, created and run by minecraft fans, and contains a bulk load of