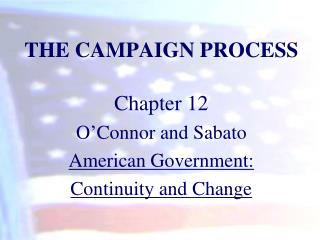 Political Messaging - . what is message?. campaign message is the core information communicated by the campaign to

An updated introduction to the ICEM CAL CAMPAIGN - . april 2010. the issue of contract and agency work was established as

The Electoral Process - . the nominating process. critical first step. nomination – the naming of those who will seek

Design Process - . design process is a collection of procedures and habits that help teams design better products. the