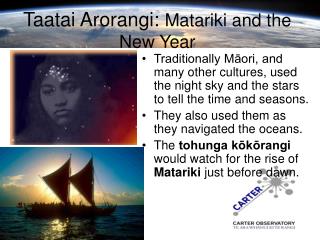 Taatai Arorangi: Matariki and the New Year. Traditionally Māori, and many other cultures, used the night sky and the stars to tell the time and seasons. They also used them as they navigated the oceans. The tohunga kōkōrangi would watch for the rise of Matariki just before dawn. Year 12 Accounting 2012 - . andrew stimson . have you decided how you are going to go this year? set goals, get into

Transitioning from Year 11 to Year 12 - . what needs to be considered?. your child’s pathway(s)/interests. your

New Year Eve Attractions at Times Square - For 108 years, times sq. has been the middle of worldwide consideration on new

Year Exam Revision - . year 9 topics – electricity, atoms, body b eautiful and waves. atoms. atoms. an atom is made of;

Multi-Year Tariffs - . in the power sector in india so far (august 2003). why a multi-year framework (myt or mytp) for

Chapter 5 - . the time value of money. simple interest. interest is earned on principal $100 invested at 6% per year 1 st

TxEIS Next-Year Payroll for 2014-2015 - . region 18 esc information systems. overview. the purpose of this guide is to