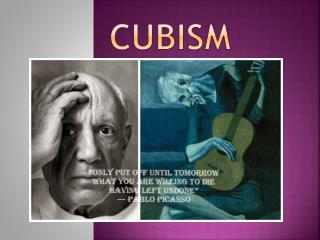 CUBISM. What is Cubism?. Cubism is an early-20th-century avant-garde art movement pioneered by Georges Braque and Pablo Picasso It revolutionized European painting and sculpture Cubism has been considered the most influential art movement of the 20th century . CUBISM - . by: khalid hamada. what is

CUBISM - . analytical cubism. the first phase of cubism (1907 to 1912) reduced natural forms to their basic geometric

Cubism - . by: abdulrahman al-mana 7a. cubism started in the 20 th century, by pablo picasso and georges barque. a cubist

Cubism - . by phillip martin. cubism. what can that possibly mean?. cubism. an “ ism ” is a suffix at the end of many

Cubism - . juan gris' portrait of picasso. in the early 1900’s, some artists became interested in african and native

Cubism - L/o: show understanding of the cubist style of art and how to recreate it through photography. all must (e):

Cubism - . by: sarah jayyousi. what is cubism? when did it start?. an artistic movement in france beginning in 1907 that

Cubism - . in art, what can that possibly mean?. cubism. cubism was a movement that began in france in the early 20

Cubism - . what is cubism?. an early 20th-century style and movement in art, esp. painting, in which perspective with a

CUBISM - . cubism. cubism was an art movement in france that lasted from 1908 to 1918 and beyond. it was started by pablo