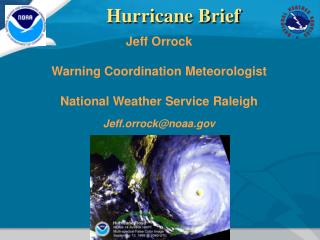 Hurricane Brief. Jeff Orrock Warning Coordination Meteorologist National Weather Service Raleigh Jeff.orrock@noaa.gov. The Future…Look to the Past. 1930 - 2005. Costliest Storms in US History. NOAA Hurricane Outlook 9 of the last 11 Hurricane Seasons have been have been above normal.

Hurricane Katrina - . silence all phones and pagers. please move conversations into esf rooms and busy out all phones.

Lesson One - . face to face with hurricane camille . objectives of teaching. to comprehend the whole text to lean and

Risk-Based Management of Hurricane Preparedness and Recovery for a Highway Agency - . presented to the virginia