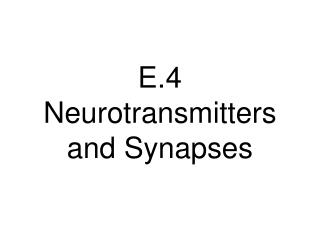 Synapses and neurotransmitters - . psychology 2606. biochemical activity. otto loewi did a cool experiment in 1921

Neurotransmitters - . dopamine, drugs, and animal models. neurons: how they function and communicate. brain u: action

Synapses - . eventually, as an action potential passes down the axon, it reaches the end of the axon and all of its