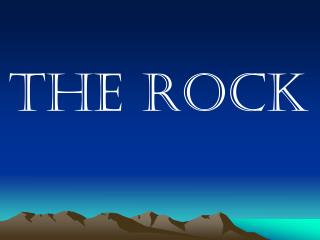 The Rock. “I believe in God, the Father Almighty,     the Creator of heaven and earth,     and in Jesus Christ, His only Son, our Lord: Who was conceived of the Holy Spirit,     born of the Virgin Mary,     suffered under Pontius Pilate,     was crucified, died, and was buried. The Rock - . by alexis gonzalez mesa and daniel peter alcaraz wilkinson. information about rock. in the 1950's, the

Rock TYPEs and the Rock Cycle - . rock types. rocks are classified by how they form. there are 3 main rock types: igneous

The Spiritual Rock - And did all drink the same spiritual drink: for they drank of that spiritual rock that followed

The Rock Cycle - . after this lesson you will be able to explain what happens during the rock cycle. what is the rock

The Rock Cycle - . by your name here. rocks are hard substances found in and on the earth’s crust. rocks are made up of

The Rock Cycle - Igneous rocks and melting. the rock cycle. a rock is composed of grains of one or more minerals the rock

The Rock Record - . chapter 21.1. the geologic time scale, based on fossil evidence , is used to organize the history of

The Rock Cycle - . by. definition:. minerals. properties:. how are these rocks formed?. w hen heat and pressure change

The Rock Cycle - . what is the rock cycle?. what exactly is a rock?. a rock is a naturally occurring solid . it is a

The Solid Rock - . my hope is built on nothing less than jesus’ blood and righteousness; i dare not trust the sweetest

The Rock Cycle - . “the rocks under our feet seem permanent, but they are constantly being changed”-dorling

The Rock Cycle - . what is the rock

The Solid Rock - (1). the solid rock. my hope is built on nothing less than jesus' blood and righteousness; i dare