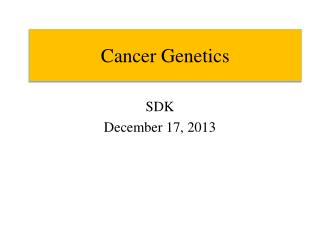 Cancer Genetics. SDK December 17, 2013. Objectives. Upon completion of this session the students should be able to Define necrosis and apoptosis Explain the process of apoptosis & necrosis Define& understand and what is cancer Explain the genetic nature of cancer Cancer genetics - . cancer; definition. unlike free-living cells such as bacteria, which compete to survive, the cells

Genetics of Cancer - . alterations in the cell cycle and gene mutations that cause cancer. how do we define cancer?.

Clinical Cancer Genetics - . our understanding of the genetics of cancer is beginning to help us design better therapies.

The Genetics of Cancer - . cancer in the media. newspapers, magazines, radio, and television are reporting discoveries

THE GENETICS OF CANCER - . dr. mohammed t tayeb. what is cancer?. neoplasm (tumour): is abnormal tissue that grows beyond