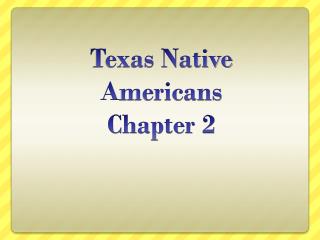 Texas Native A mericans Chapter 2. It is best to think of Indians as “ peoples ” or “ cultures ” rather than as “tribes”. Not all Indians who had the same culture belonged to the same tribe. In fact, some Indians did not belong to tribes. Instead they lived in small groups or bands. Native Americans Unit 1 - . 2012-2013 test review. how did native americans of the eastern woodlands area prepare their

NATIVE AMERICANS OF TEXAS - . i. the ancient texans the first person to call north americans “indians” was

Do You Know Where You Live? - . you live in a place that used to be a forest!. eastern deciduous forest. on the piedmont.