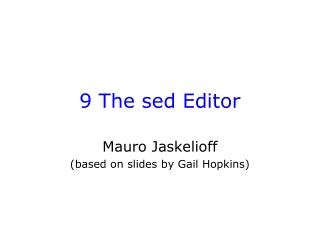 9 The sed Editor. Mauro Jaskelioff (based on slides by Gail Hopkins). Introduction. sed is a Stream Editor Designed to edit files in a batch fashion Not interactive Often used for text substitution When you have multiple changes to make to one or more files: sed - . sed is a program used for editing data. it stands for stream editor. unlike ed , sed cannot be used interactively

SED) - . presentation to the international conference on globalisation and development in the chinese economic region,

SED - . (stream editor) by: ross mills. what is sed?. sed is an acronym for stream editor instead of altering the

SED 695C - . week 2 mini lessons titles strong introductions. titles. a mini lesson. what does a title do? what are the

Editor: - . dr mohammad sadrkabir. is there an association between coeliac disease and flammatory bowel diseases? a study