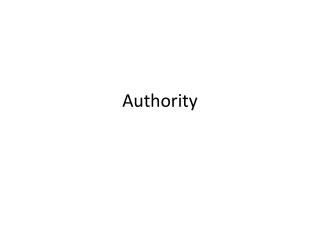 Authority. Nullius in Verba. The Royal Society in London is the oldest scientific society in the world. It’s motto is “Nullius in Verba ,” which translates to: “Take nobody’s word for it” or “Trust no one.”. Authority. Authority - . col 3:17 whatever you do in word or deed, do all in the name of the lord jesus, giving thanks through him

Authority - . one that is invested with the power to enforce laws, exact obedience, command, determine, or judge.

Authority - . legal right to use power. what’s the limit of this authority?. legitimacy. accepting that the authority

Authority - . the icrc international c ommittee of the red c ross has not made a statement on the responsibility for the

AUTHORITY - . and the word is…. it’s all about the authority of the source:. who are they? what do they know about

Authority - . f rom heaven or men. how do we determine what we may do? individually as christians as a congregation.

Authority - . authority. definition: authority in teaching, as in anything else, is legitimate influence over others