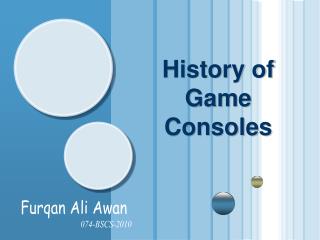 Video Game Consoles - . by: melissa palanca period 4 apush . what is a video game console? . it is an “interactive

The History of Consoles - . computers for entertainment by: brandon hansen and chad spencer. 1970’s &amp; early

COMMUNICATION ON GAME CONSOLES. - Communication on game consoles. xbox 360. an xbox 360 can go online and you can

How To Take care Of Video Game Consoles Accessories - Beside slack, cleaning your gaming hardware is one of the most