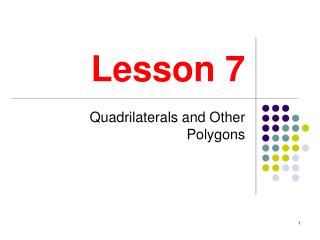 Lesson 7-7 - . numerical approximations of integrals -- what we do when we can’t integrate a function riemann sums

Lesson #7 - . arrays ‏. why arrays?. to group distinct variables of the same type under a single

Lesson # 7 - . translations of matthew 5:8. blessed are the pure in heart: for they shall see god. (kjv) god blesses

LESSON 7 - Essential words for the toefl. lesson 7. by : sara al.harbi. we have to choose appropriate books for children.

Lesson 7: - . the financing process. loan costs. primary consideration for most buyers in choosing lender is how much