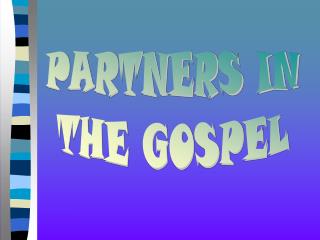 The Gospel In Micah - . micah 4:1-8. a proper beginning. can a building be built “from the top down?” in bible study,

Partnership in the gospel - . meditations through philippians. philippians

The “GOSPEL” IN GENESIS - . title page. the information in this presentation from slide 1 thru 16, and 18, was

the Gospel - . what does a person need to know to get to heaven? how can a person have a relationship with god?. key

What makes the Gospel- The Gospel ? - . i am astonished that you are so quickly deserting him who called you in the grace

The Gospel - Speaking god’s message. the gospel. the inherent power of god’s word spoken by men. gospel power. the

The GOSPEL - Of. the gospel. matthew. gospel of matthew. history surrounding the book the law, the prophets and the

The Gospel - Is that we are saved from god by god for god to know god. the gospel. understand that. god is not a means

The Gospel - . a series in romans. despite our faithlessness god is faithful. the universal reality of sin. everyone

The gospel - . have you found jesus?. luke 2,16 they found maria og joseph and jesus in a manger”. do you know jesus?