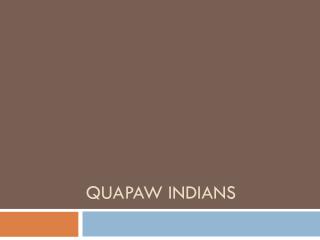 Quapaw Indians. The Quapaw Tribe. The name Quapaw (Ugakhpa or O- gah - pah ) is translated as “people who live downstream.” Our state is named for this American Indian tribe!. The Quapaw looked like this . The Quapaw language. The Quapaw Indians - . part of arkansas history. how did arkansas get its name?. from the quapaw indians, who were called

INDIANS - . the tonkawan indians of texas. the name tonkawa is from the waco term tonkaweya, meaning &quot;they all

Indians - . by brett and dillon . introduction. did you know there are more than two hundred tribes in the world! listen

Comanche Indians - . bygage,keenan , markaythia. homes. the comanche indians were once part of the northern shoshone