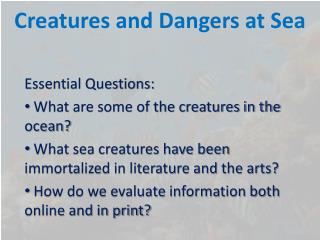 Creatures and Dangers at Sea Creatures and Dangers at Sea. Essential Questions: What are some of the creatures in the ocean? What sea creatures have been immortalized in literature and the arts? How do we evaluate information both online and in print?. What Might You See on A Dive Into the Ocean?. Sea urchins

Creatures and Dangers at Sea

Product Meeting July 2007 - . alfie palmier part 1. why are you all here?. aims and objectives. acquire knowledge about

Introducción / Introduction - How can we protect our families from dangers in the fields? this material was produced

HEY. Why so serious? - . no small furry creatures were harmed in the production of this presentation. peta disclaimer :.

A. Farewell Address - In what speech did george washington encouraged the u.s. to remain neutral and form “no

Description - . jelly fish can come in all shapes and sizes. they are called jellyfish because their bodies are wobbly

Sea Creatures - . the maldives is surrounded by sea. video. objectives of the lesson . -identify at least ten sea

FIREFIGHTER SURVIVAL - . self rescue. “in order for a firefighter to survive the dangers of fire fighting, he must know

Heartfulness Magazine - February 2017 - In the february issue, we celebrate love, not in superficial commercial way, as

Living with creatures - Photographers have documented the relationships between humans and animals in countless ways.