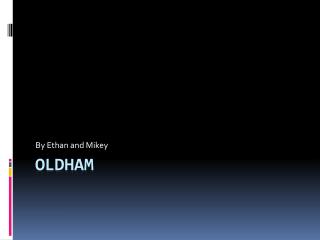 By Ethan and Mikey. Oldham. Introduction. The people of Oldham would like to take you on an experience of where they live, the places they visit and what they like to do. Saint Josephs in Oldham. Crystal Oldham - . nhla director of education hardwood forest foundation executive director. it started as a seed. as an

A Year with Project Compass - . libraries as lifelines to economic recovery. a collaboration of webjunction &amp; the